For many people, mastering one foreign language already sounds daunting. Imagine learning three different languages at the same time. That’s exactly what some local families manage in their tri-lingual households. Cultivating a multilingual home comes with its own challenges and rewards. Here is why and how two local families do it.

“It’s one of those things that you can’t escape in the US anymore,” says Rodrigo Rión, vice president at The Language Academy of the Carolinas. “English is not the only language… We are surrounded by other cultures [and] all sorts of mixed families.”

Take his family, for instance. Rión grew up in Mexico and his wife, Lenka, comes from the Czech Republic. While their two year old son’s primary language is English—the language he speaks at daycare—they want to expose him to Spanish and Czech at home.

“It’s a constant mental work out for me,” says Rión, who manages to stick to Spanish with his son about 80% of the time. He believes it’s well-worth the effort. For the couple, there are multiple incentives. They want their son to know his own multinational heritage and to be able to communicate with family members. They also hope it will give him professional advantage someday. 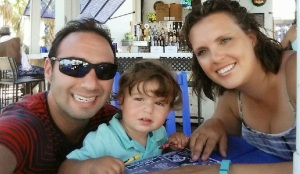 The Rión family on vacation.

“I want to give him… more opportunities as he grows up,” says Rión, who first came to the US on an exchange program as a 14 year old and then relocated here permanently with his family at age 20. “It has been an opportunity for me… [and] has come a lot from my family. My parents were very big on promoting languages when I was a kid.”

Rión also says languages are a necessary skill for Americans to keep up in a global economy. “Everywhere in the world speaks at least 2 languages now,” he says. “Even in third world countries. In that regard, the US is falling way behind.”

How do you make it happen?

The Hildebrands, German-born Volker and his Peruvian-born wife Ana Maria, have developed specific guidelines to create a trilingual home with their two daughters.

“The kids only hear German when I address them,” says Volker Hildebrand “and only Spanish when she addresses them and we expect them to respond in [kind].” Although Volker and Ana each know some of their partner’s native language, they prefer to communicate with each other in English.

“At the table, we speak three languages at the same time,” says Ana Hildebrand, a civil engineer, who met her husband in Charlotte after relocating here for work. If someone doesn’t know the right word in one of the languages, they try to help each other. To an outsider, communicating in so many languages may sound complicated but they both say for their family, it works well.

“I think if you start early and are disciplined in the beginning it’s very natural for the parents and kids,” says Volker Hildebrand, a mechanical engineer who frequently switches languages in his workplace, Continental Tire the Americas in Ft. Mill, SC. German and English are used widely at the company, a subsidiary of Continental AG/Germany–one of the largest automotive suppliers worldwide. He has also studied Spanish there thanks to special onsite courses sponsored by the company and taught by teachers from The Language Academy.

3. Integrate the target languages into your life

Developing a trilingual household often requires other adjustments to make the languages stick. For the Hildebrand girls that meant only watching TV and movies in Spanish or German as young kids. “Barney spoke Spanish,” says Volker Hildebrand.

Now that they are in school, the girls tend to speak English to each other, incorporating slang they’ve heard from friends. However, they are also continuing their German studies at Waddell Language Academy, a language immersion program offered by Charlotte Mecklenburg Schools.

For the Rion family, it has been more challenging to balance the three languages equally since Czech speakers and educational resources are much less available than their Spanish counterparts in Charlotte. There is one constant, however: weekly Skype phone calls to Lenka’s mom abroad that take place in Czech.

The Hildebrands say that their daughters also enjoy using Skype and FaceTime to communicate with cousins and other family members abroad. Travel provides another opportunity for the girls to practice and hone their language skills.

“We do travel to Germany and Peru on occasion,” says Volker Hildebrand. “Even though the girls mix the languages quite a bit when they’re here… after a week [in either country], they adjust.” They stop using English and communicate easily with family and friends. 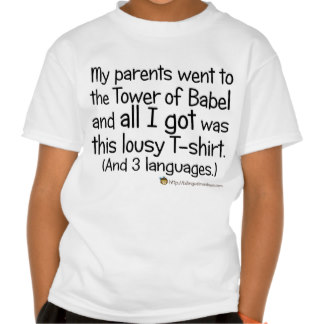 “Children are like sponges,” says Rión. “They just absorb… as adults we become rational, we want to learn the reason behind something. We want to understand the logic behind it. Children don’t question it, you say ‘this is the way we do it’ and they just do it.”

The Hildebrands say their daughters speak without a discernible accent in German or Spanish. They sound like native speakers even if their vocabulary in German and Spanish understandably lags behind those of kids who grow up in Germany or Peru.

As far as English and their other academic subjects go, both girls are managing well. Their oldest daughter has even added French to her plate now that she’s started middle school. Volker says he thinks her multilingual background makes it easier for her to pick up a new language faster.

Learning multiple languages can also serve as a gateway to discovering other cultures. “Our kids love to eat,” says Volker Hildebrand. “When they’re in Peru, they enjoy the food their grandmother prepares and all the sweets. And when it comes to Germany, they find their favorite foods there.”

Lessons we can take from the trilingual experience

Food also provides an entryway for families that don’t have the advantage of a native speaker (or two!) at home. Take advantage of Charlotte’s diverse restaurants serving food from around the world and check out the many local cultural organizations –such as International House, Latin American Coaltion, Alemannia German Society, and the Alliance Française — that promote global understanding. These experiences can spark an interest in other cultures that will better equip our next generation for a multilingual future.

The Language Academy of the Carolinas offers courses in English, French, German, Italian, Mandarin, Portuguese, and Spanish at three convenient locations in Charlotte, NC. Visit our website for more details on all of our services including Business Programs, translation, and language camps for kids.